The spire of Christ Church Spitalfields

When part of the great wave of Huguenot religious refugees settled in Spitalfields in the late 17th century, the area still belonged to the large parish of Stepney, or Stepenay, as the  scribes wrote in the temples registers. Following in the steps of an earlier group of weavers in the area, Huguenot artisans working in the silk trade successfully developed new techniques, and master weavers and mercers played an important role in influencing pattern design. Of particular renown were high quality flowered silks, much in demand not only in England but in the New World, where colonial merchants' wives eagerly awaited the arrival of the latest fashions. During the 18th century, the cut of women's dresses changed very little, but the pattern woven into the silk had to follow innovative design trends. Many of the master weavers commissioned their designs from Anna Maria Garthwaite, 1688-1763, a talented English spinster living in Wilkes Street, where for 35 years she produced more than a thousand designs for her Huguenot neighbours.

For over a hundred years, various dialects of the French language could be heard in the streets, small courts and alleys of Spitalfields, where, by 1700, thousands of  refugees and their families had taken up residence. While the master weavers inhabited fine houses in Spital Square and its adjoining streets, the jobbing weavers, who carried out piece work for their employers, lived and worked in weavers' garrets, or in two-roomed cottages in Whitechapel or Bethnal Green. All these dwellings had wide windows to let in sufficient light for the weavers at their looms. Huguenot children as young as eight helped process the silk, their small fingers adept at teasing the thread from the cocoons, and among the associated trades were those of the silk winder, dyer, and throwster, who used his skills to twist and re-twist strands of silk to create strong warp thread for the looms.

Following James II's Act of Indulgence in 1687, a significant number of Huguenot temples were built in Spitalfields to accommodate the new arrivals; until then, the refugees had worshipped at The French Protestant Church of London in Threadneedle Street, about a mile away. However, the nonconformist Mother Church, founded in the City of London in 1550, was becoming overcrowded. The new places of worship also followed the Calvinist model, and often, the officiating pastor was a member of the Huguenot diaspora, who had gathered his former flock around him in the country of refuge. Among the later temples was L'Eglise Neuve at the corner of Brick Lane and Fournier Street, built in 1743 as a chapel of ease for the Threadneedle Street Church, and which has since served denominations of successive immigrant communities in Spitalfields.

Many of the weavers suffered hardship when trade was bad, and were relieved by Huguenot soup kitchens, the first of which was established in 1695 at the sign of the Pelican in the Artillery Lane area of Spitalfields. Grants in kind were also made from the chambre des hardes, a store of clothing and shoes for refugees in need, and for their growing children. There were Huguenot schools too, and from 1719-1802 the Threadneedle Street Church ran a charity school in Spitalfields, its second home adjacent to L'Eglise Neuve. After schooling the children until the age of 14, the charity's aim was to apprentice them to local craftsmen.*

In 1729, Christ Church Spitalfields, Nicholas Hawksmoor's masterpiece in Ashlar stone, was consecrated, and Spitalfields became a parish in its own right. Over time the Huguenot population moved on and was assimilated, and by 1815 most of their temples had closed as congregations dwindled, or merged with the Mother Church at Threadneedle Street. Many of the elderly Huguenots entered La Providence, the French Hospital in St Luke's parish, Finsbury, which later relocated to rural Hackney, and by the end of the 18th century George and Samuel Courtauld were moving their weavers out to Essex mills in Halstead and in Braintree. Of those who remained in the area, some worshipped at Methodist or other nonconformist chapels, but many already frequented Spitalfields' new Church of England. In 1761, Jean Rondeau, a former master weaver whose business was in Wilkes street, had become its sexton, and other Huguenot descendants held parish office. He, and a considerable number of those 'of the better sort', successful middle class people, were among the parishioners buried in heavy lead coffins within Christ Church's vault. 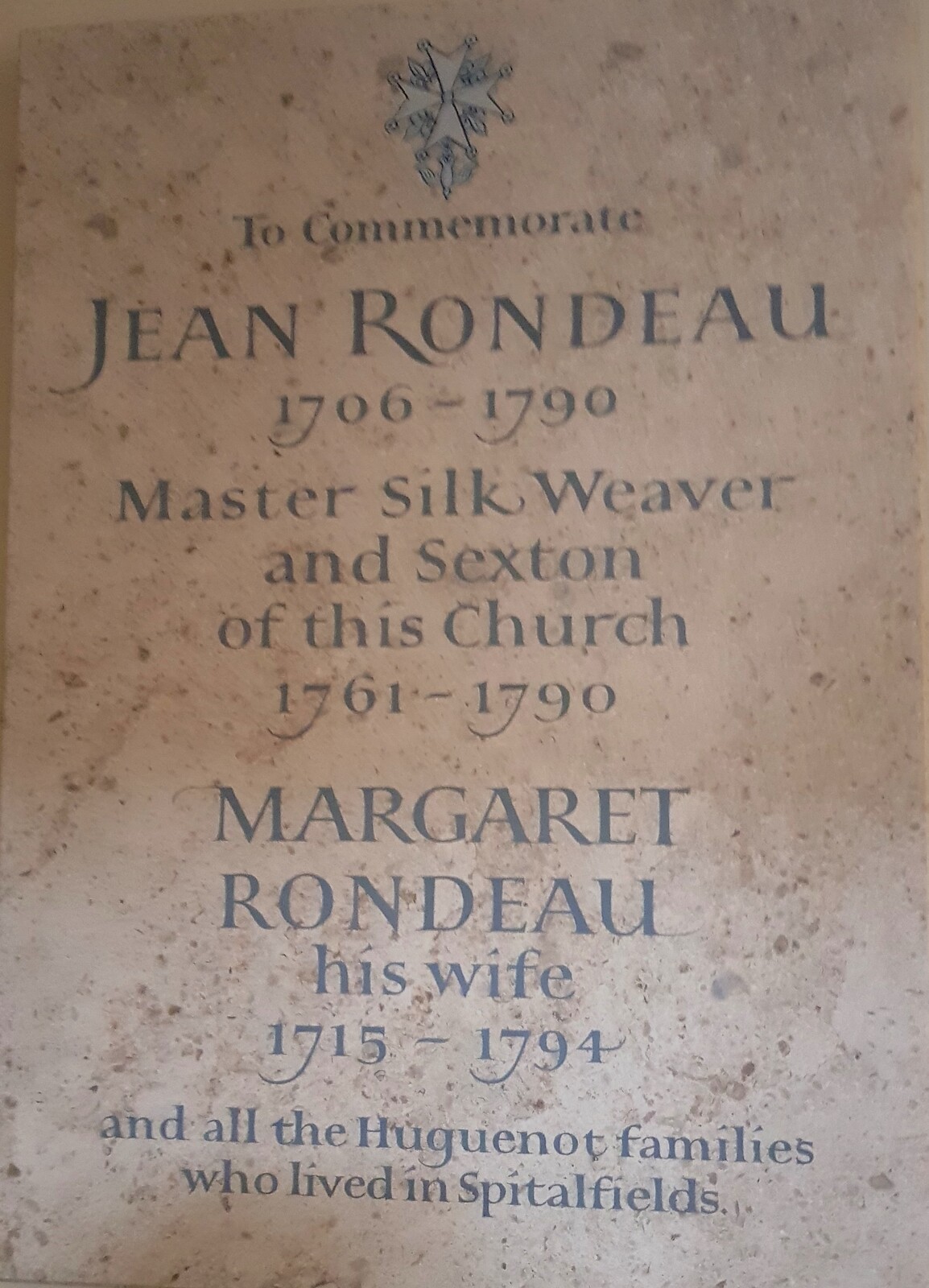 When the sealed vault was excavated by a team of forensic archaeologists in the 1980s, to enable the Church to adapt the space for parish use, many of the Huguenot coffins were found to still have plaques recording the names and dates of their occupants. Now conserved at London's Natural History Museum, their remains form a homogeneous group of over 300 sets, some spanning several generations of one family. Due to the high level of recorded information for each individual, derived from the Huguenot registers and other sources, they constitute a major international resource for ongoing medical and pathological research.