Read our Blog
Follow us on Twitter
Menu
You are here: Blog » Huguenot Gardens and Gardeners at the French Protestant Hospital

Huguenot Gardens and Gardeners at the French Protestant Hospital

During the prolonged spring lockdown, people have been turning to their gardens for solace, the cultivation and enjoyment of trees, plants and flowers having long been recognised for their calming, uplifting effect. The archives of the principal Huguenot charity in England, The French Protestant Hospital, show that considerable importance was attached to the garden settings of its successive buildings by those responsible for their design and upkeep, for the benefit of the refugees and their descendants who have made it their home for more than 300 years.

Continental Huguenot garden designers of the 17th century, such as Isaac de Caus, who worked in England at the Palace of Whitehall and at Woburn Abbey, and Daniel Marot, who worked for William III at Het Loo in Holland and then at Hampton Court, are reasonably well known. Lesser-known Huguenot gardeners however are credited with bringing a broad knowledge of horticulture to the countries in which they took refuge, and after fleeing France in the late 17th century, many a jardinier françois, such as a Monsieur Mandineau at Shoreditch, set up business  in the City's adjacent villages.

From 1682, well before the endowment of the first French Hospital by Jacques de Gastigny and other benefactors, distressed and sick French Protestants fleeing persecution in France, were lodged by the Corporation of London at a former plague isolation infirmary in Cripplegate ward, known as The Pest House. Functioning as a reception and triage centre for the often traumatized refugees, it later went on to become the precursor of the Hospital. Although no details survive of its grounds, it is likely at the very least to have had a kitchen and herb garden, and several French gardeners are documented among the refugees received there. 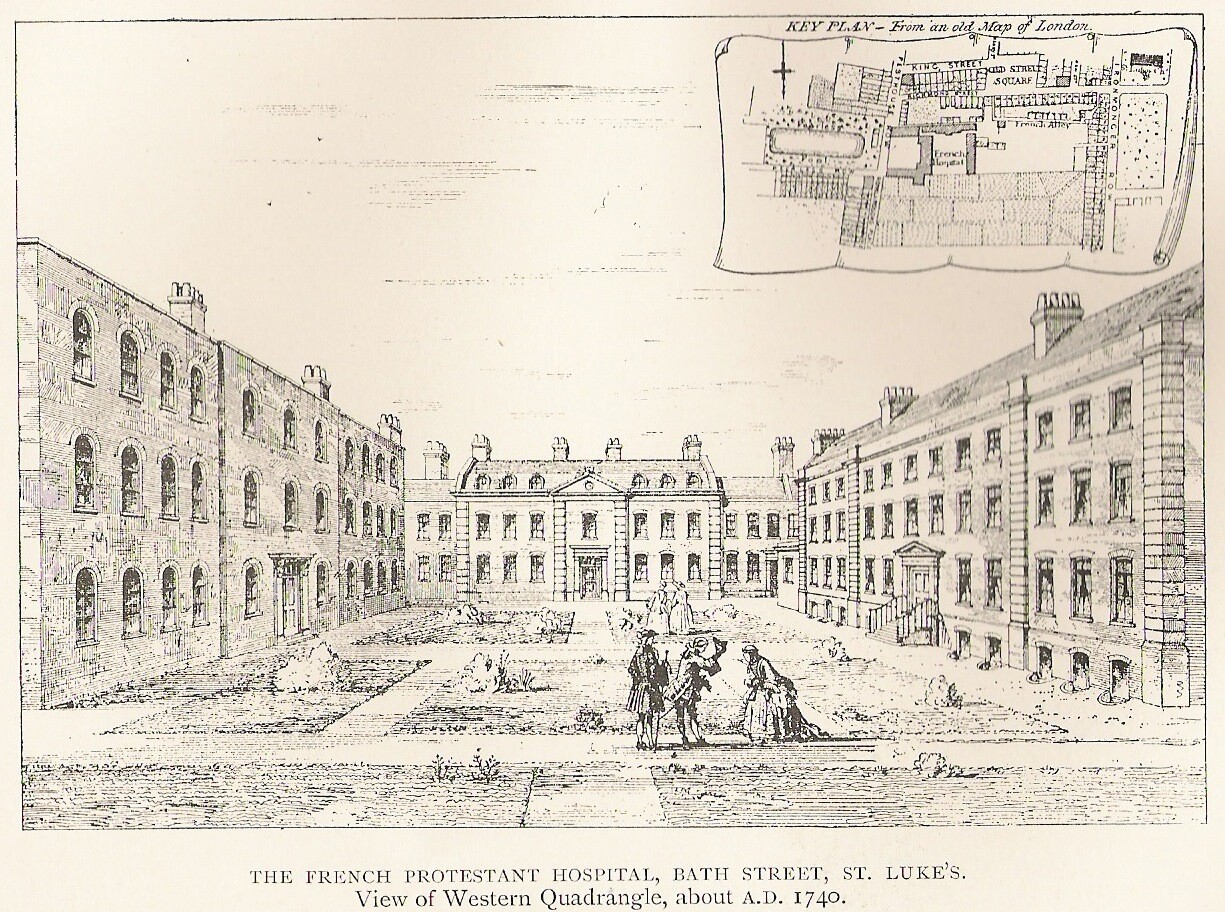 1718 saw the foundation of the first French Hospital incorporated by royal charter, built in Bath Street on a site called The Golden Acre in St Luke's Parish, Finsbury. Close to a natural reservoir called the Peerless Pool, it abutted to the north on the Pest House site, and was surrounded by the orchards and market gardens which flanked the green lane to Islington. The new building could house up to 230 inmates, many of whom were former Spitalfields weavers. On a practical level, the Hospital grew its vegetables, kept chickens and at one point raised pigs, and had its own bakehouse and brewery. It also had a chapel, and was among the first institutions in London to provide humane care and accommodation for the mentally ill. It seems that no effort was spared to create a tranquil setting: 17 trees were planted in the courtyard in the spring of 1719, and in 1739 a large orchard was created on part of the old Pest House site, which had been acquired the previous year. A total of 180 fruit trees were planted: mulberries, peaches, quinces, nectarines and vines, with apple, plum and cherry trees being added, as well as several varieties of French pear, in the autumn of the same year.

Among the Huguenot gardeners recorded at the Hospital, by now generally known as La Providence, some had been taken on to work there at their trade, and details for several of these men have survived: the earliest to be recorded was Louis Boissinot, since 1715 an agricultural labourer at the Huguenot community of Thorpe-le-Soken, in Essex, but originally from La Mothe-Saint-Héray in Poitou. However, the good reputation of La Providence had reached his ears, and in 1729, then a widower, he left Essex and paid £10 to be taken into the Hospital as a garden worker and a servant, in exchange for a home for the natural term of his life. His work is likely to have included clearing, levelling and draining the ground, ahead of planting. André Fonteneau, who entered the Hospital in 1736 and lived there with his wife, is recorded as a paid gardener, c.1736-45, and oversaw the tree planting scheme. It was he who recorded the varieties of French pear planted in the orchard. Peter Rainbow (Pierre Rainbau), maternal grandfather of resident siblings Eliza Bulger and Peter Keys, was documented by them as the gardener at Bath Street in the later 18th century, his wife having worked there at the same time, as a nurse. Thomas Billiard from Caen in Normandy, who entered the Hospital in June 1782, was promoted to head gardener and inspector of works in August of that year when the man in post fell ill; he was then installed in the gardener's room, and paid gratuities of three guineas. Etienne Mounet, from St Maixent in Poitou, appointed gardener in the early 1790s, was also paid three guineas every quarter for his work. 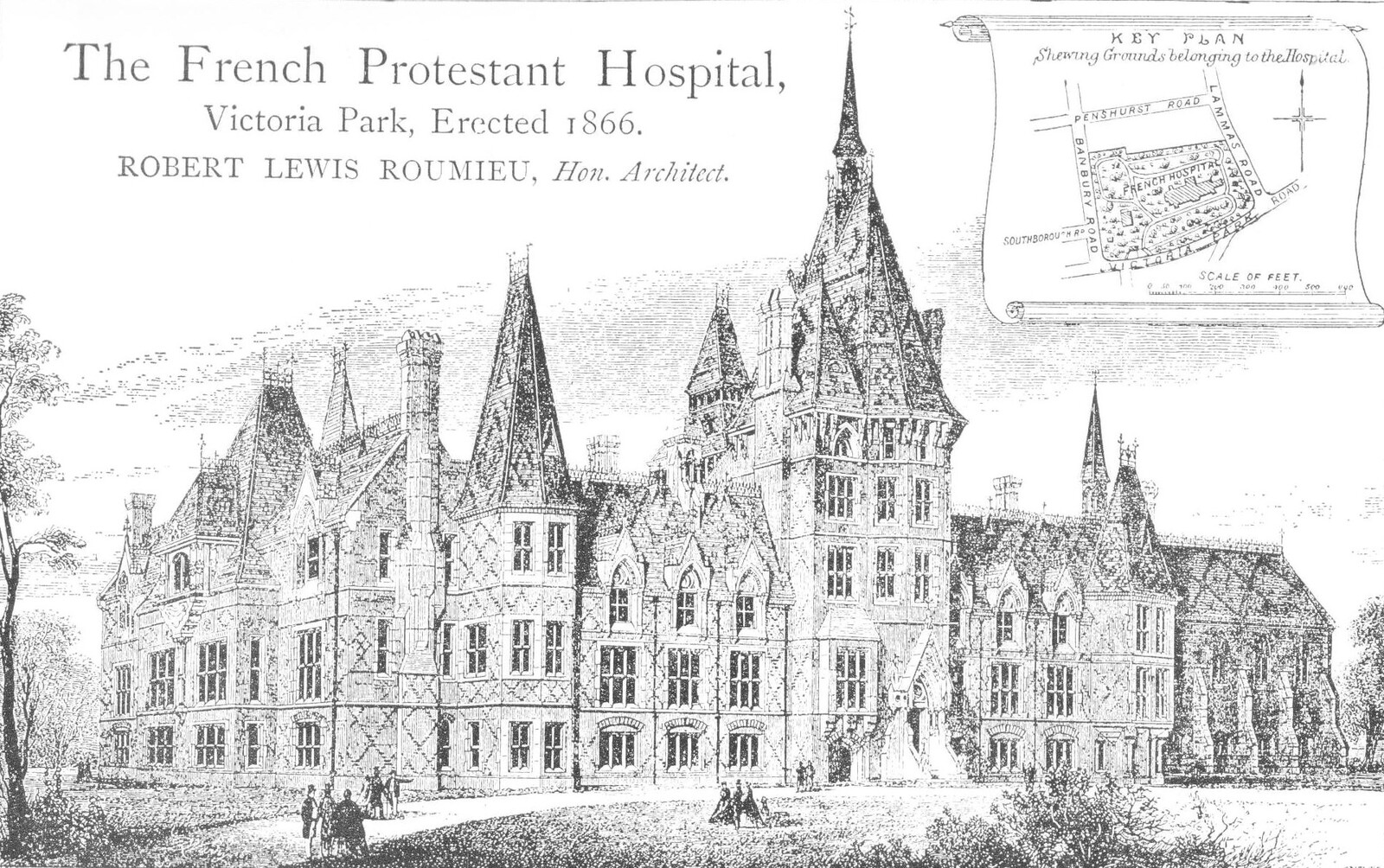 The second home of La Providence, built in 1866 on a rural site of three and a half acres at Victoria Park, Hackney, and designed pro bono by the Huguenot architect Robert Lewis Roumieu, resembled a small French chateau, in the Victorian Gothic style. It was designed to house fewer inmates, 40 women and 20 men, demand for places having dwindled since the days of the old Bath Street premises. Modern and well appointed, it had its own chapel, as well as a library and separate day rooms for male and female inmates. Like its predecessor, it boasted a kitchen garden, and extensive grounds, where inmates could sit or walk, and entertain their visitors. Among gifts made to the new institution was a collection of several hundred trees, shrubs and fruit trees, given by Parke Pittar, one of the Directors, whose letter listing the items was mounted in the Hospital's minutes. Monthly medical reports, drawn up by the visiting surgeon who attended the inmates, occasionally record that cut flowers from the gardens were ordered for those confined to their rooms through illness or invalidity, to raise their spirits. Evacuated during the Second World War, the residents were never to return, since the building was requisitioned by the LCC, and later came under a compulsory purchase order. 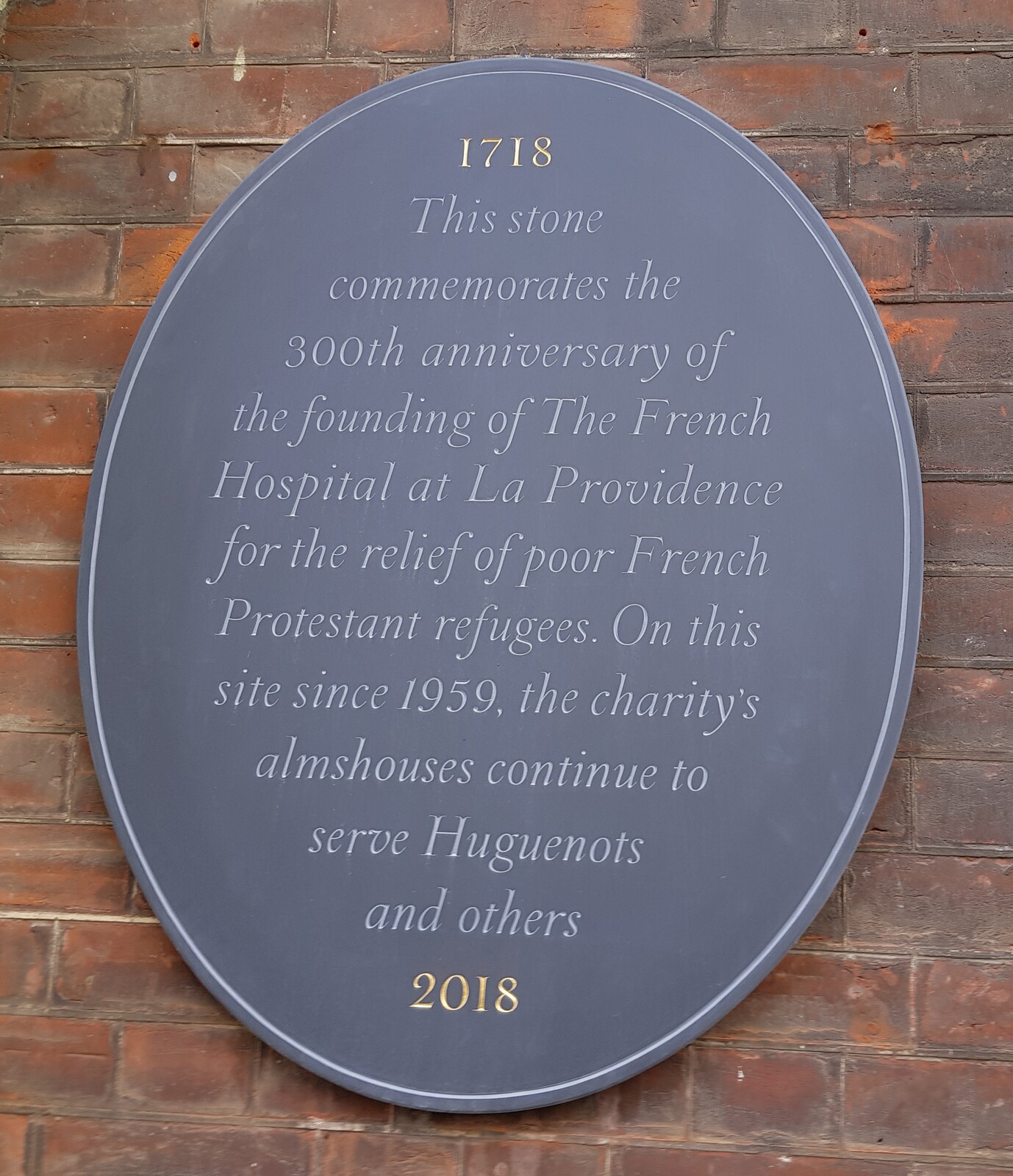 Since 1959, under a new royal charter designating it as an almshouse, La Providence has been installed at Theobald Square on Rochester High Street, where the charity provides sheltered flats for its residents. A Huguenot garden, part of which nestles against a section of Rochester's old Roman wall, was designed in 1983 by Lady Monson, then Chairman of  Huguenot Heritage 1985, set up to commemorate the Tercentenary of the Revocation of the Edict of Nantes. Nearly all the plants and trees have some association with France: among them, a central box-edged parterre with a bronze bust of Admiral Gaspard de Coligny, recalling formal French and Dutch gardens; fragrant French culinary herbs, and lavender; gallica roses, with at their feet old-fashioned pinks and auriculas, both associated with the Huguenot refugees; two espaliered French varieties of pear, a medlar, and a white mulberry, to symbolize the silk weavers. A water fountain and a decorative tank, as well as additional benches, were donated by the Directors and their families in 2002. In recent years, a Garden Club has been set up at La Providence by and for green-fingered residents, and has proved a great success.

One of life's inestimable gifts, a fine garden enables us to take care of both our physical and mental health, and like their predecessors at the earlier buildings, residents and staff at La Providence have no doubt benefitted from their delightful setting more than ever in recent weeks.