Read our Blog
Follow us on Twitter
Menu
You are here: Blog » Spotlight on the Huguenot ivory carver David Le Marchand

Like many other Huguenot craftsmen, David Le Marchand (1674-1726) fled France after the Revocation of the Edict of Nantes in 1685. He first settled in Scotland before moving to London, where he soon became the most prominent portraitist in ivory of his day. About one hundred of his works are known and these offer the main source of documentation about his career. Some mystery persists: despite his fame and his wealthy patrons, he died in poverty in the French Hospital in 1726. George Vertue (1684-1756), the famous antiquarian whose Notebooks are a valuable source on 18th century British Art, mentioned David Le Marchand on several occasions, listing a number of his portraits and describing him as ‘an ingenious man for carving in ivory’. 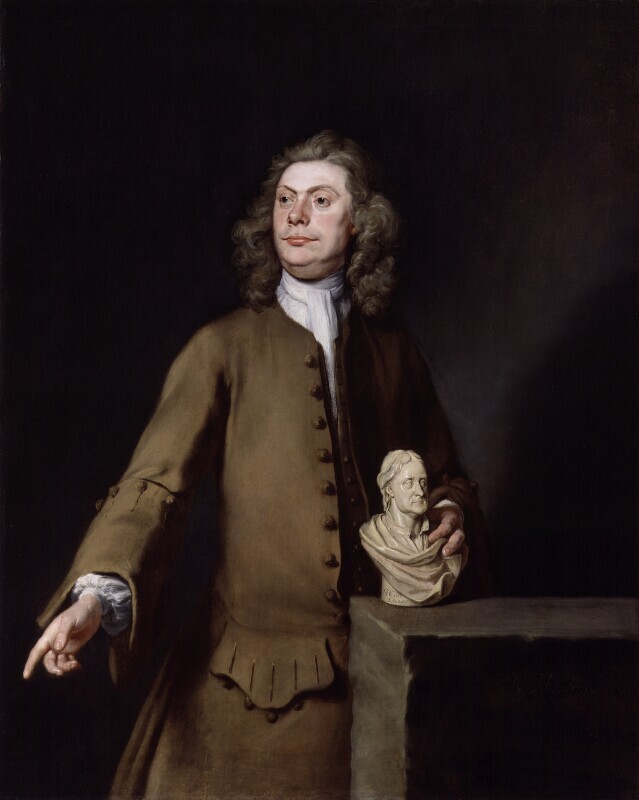 Born in Dieppe in 1674 to a family of Huguenot descent, David must have learned his craft in his native town, although his father was a painter. Dieppe was the French port to which elephants’ tusks were traditionally shipped from West Africa and subsequently became a centre for ivory production. Already praised by the ancient Egyptians and Greeks for its smooth and glossy finish, ivory was very fashionable during the Middle Ages, although typically reserved for Christian iconography. The production of ivory carvings diminished considerably during the Renaissance period, possibly due to the disruptions of trade routes caused by the frequent wars. The importation of ivory rose again in the 17th century with the development of the slave trade, and continued throughout the 18th century and later in the 19th century with the increase of supply derived from colonial expansion.

David had just turned 11 when Louis XIV revoked the Edict of Nantes, but it’s unclear whether his family fled in 1685 or a few years later. Although the standard route for anyone fleeing from Dieppe would have been to the South coast of England, David’s first mention of living in Britain was in Edinburgh at the age of 22. On 12 February 1696, he was granted an official licence to practice his art and to open a workshop in the Scottish capital, on condition that he took local children as apprentices. The small community of Huguenots in Edinburgh might have welcomed him and helped him settle. 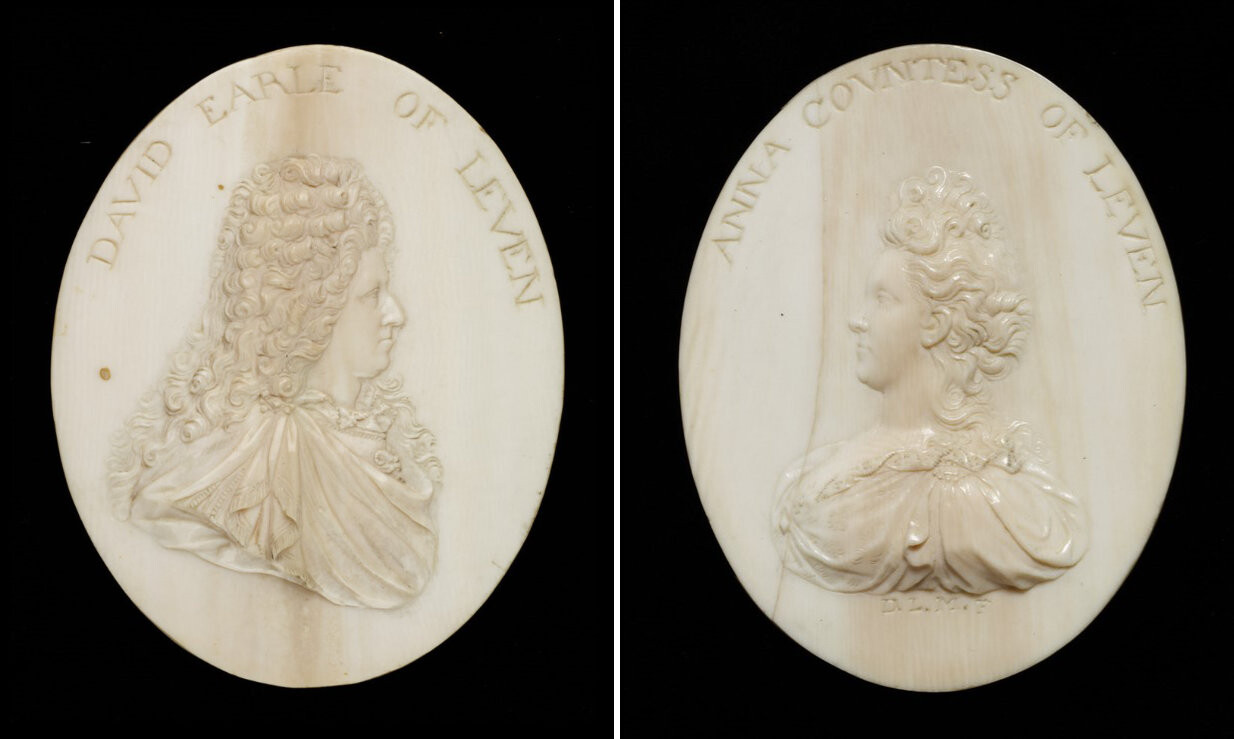 David Le Marchand’s activity in Edinburgh is documented through a group of portrait medallions of Scottish patrons, two of which are held at the V&A, while others were recently acquired by the National Museums of Scotland. These medallions show that David developed a rich activity soon after he opened his workshop. Ivory portraits were extremely fashionable at this time and David was already mastering this art from his early twenties. From the outset, he followed a well-established French practice: the portraits carved during his first years in Scotland – which include the V&A medallions above – are anchored in this tradition, displaying a relatively shallow relief and neatly engraved inscriptions.

This small ivory relief recently gifted to the V&A probably also dates from these early years in Edinburgh. Monogrammed in its back ‘D.L.MAD. F.’ (David Le Marchand Fecit), it shows a semi-nude seated nymph with a satyr. The figures are both carved with great virtuosity and with a relatively high relief that would become one of Le Marchand’s characteristics. The glossy finish of the skin contrasts with the textured hoof and the grass. The representation of the Satyr and the Nymph was fashionable in the Renaissance, and the composition may have been inspired by a print which has not yet been identified. The figures are cut out from their background which could suggest that they were conceived to be mounted on a coloured hard stone backing, possibly a blue lapis lazuli symbolizing the sky. This type of small mythological ivory relief was carved either on commission or, more likely, for an open market and purchased by collectors.

This mythological scene is unusual in Le Marchand’s production but not unique, as seen in his statuette of Venus and Cupid which was likely carved later in his career. The most fascinating mythological or allegorical group he carved, however, is a reduced copy of a garden sculpture made for Versailles by Thomas Regnaudin in 1675-87 entitled Saturn Abducting Cybele, now in the Louvre, Paris. There is some confusion about the subject represented here. It has been suggested that this ivory could be a representation of Missed Opportunity, in which Opportunity – who has been seized by Time – takes her own forelock to kill herself while Penitence or Regret could be the woman with the lion. The impressive carving here would suggest a work made at the height of his career, but no records have been found. The work recalls David’s French origins, but it is unlikely that he ever saw the original sculpture. Rather, he most likely copied a drawing after the marble, or possibly a print. 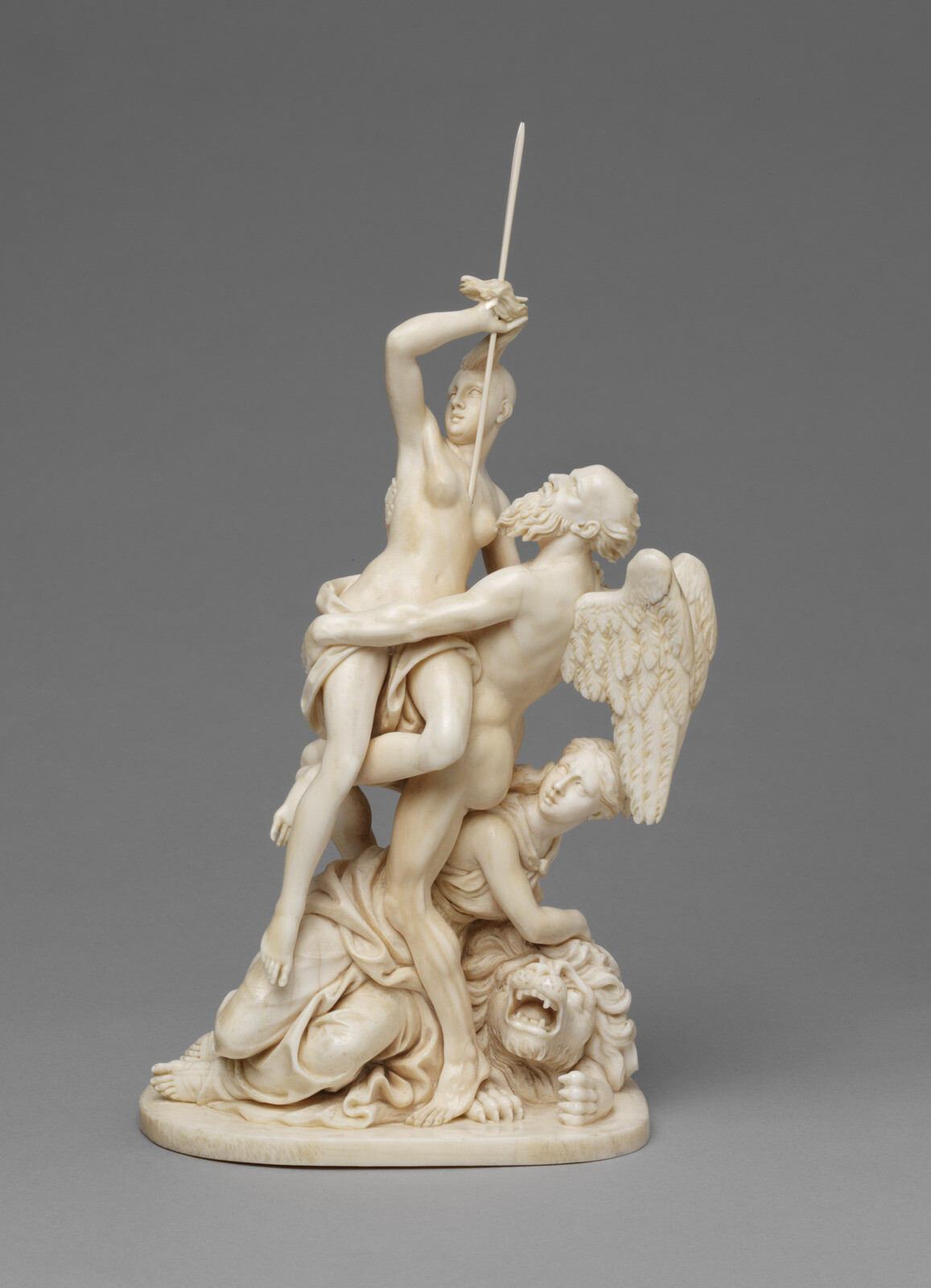 After spending a few years in Edinburgh, David settled in London by 1700, where he remained for the rest of his life. Once in London, David Le Marchand soon received prestigious commissions, including portraits of King George I and Queen Anne. While these numerous portraits indicate David’s success as an artist, very few archival documents have been linked to him, and his actual career remains largely unknown. The first mention of a ‘David Le Marchand’ in London dates from 1705 in a parish register of the Church of the Tabernacle – where he acted as a godfather – but unfortunately his occupation isn’t recorded. In October 1709, a ‘David Le Marchand’, most likely our ivory carver, signed the Oath Roll for Naturalization.

David soon developed a different way of carving portraits, moving away from the type of medallist carvings that his predecessors produced and that he himself had made while working in Scotland. His more naturalistic portraits were either in high relief or created as little busts, some small and others considerably larger. 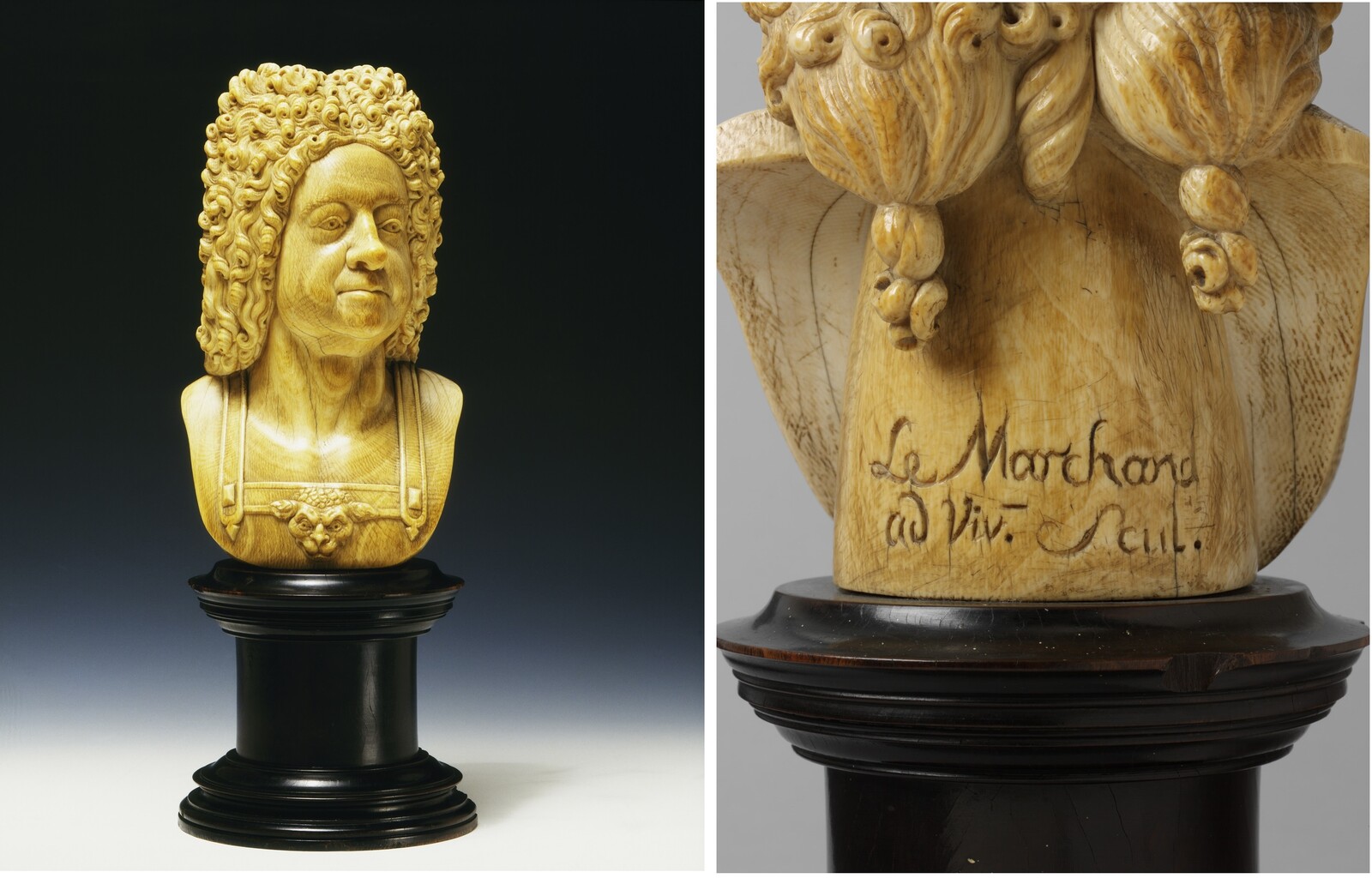 One of the largest works David Le Marchand ever carved is the bust portrait of King George I. The inscription engraved on the back, in a loose script typical of David’s later manner, reads ‘Le Marchand ad Viv. Scul.’, which would indicate that the King sat for his portrait. Ivory carving was a notoriously long and fastidious process, and so it is unlikely that the King was present while the portrait was carved. However, it is possible that David first made a wax or a clay model of the king. The occasion for which this bust was made remains unknown. In this portrait, the King is wearing a so-called ‘campaign wig’, with the hair at the back knotted for easier management. By combining the Roman armour and this type of wig, David is suggesting the King’s military prowess.

David Le Marchand was probably able to settle in London and find new patrons thanks to his Huguenot network. Some of these connections are documented, like Matthieu Gosset, a wax craftsman who signed the Oath Roll for Naturalization on the same day as David. Other connections are known through the portraits David made of them, such as the jeweller and businessman Michael Garnault, the classical scholars André (1651-1722) and Anne (1654-1720) Dacier (who embraced Catholicism in 1685), and Sir John Houblon (1632-1712), who became Governor of the Bank of England and Lord Mayor of London.

A pair of medallions held at the V&A are believed to be the portraits of Gamaliel Voyce (1672-1754?) and Mary Voyce (1651-1729), they both bear inscriptions with the names of  the sitters. Gamaliel Voyce, possibly of Huguenot descent, was an apprentice clockmaker in 1687. In 1694, he registered with  the Clockmakers’ Company, which was established by Royal Charter in 1631 to include all individuals following the trade  of clockmaking in the City of London. Mary Voyce, considering her age, may have been Gamaliel’s mother 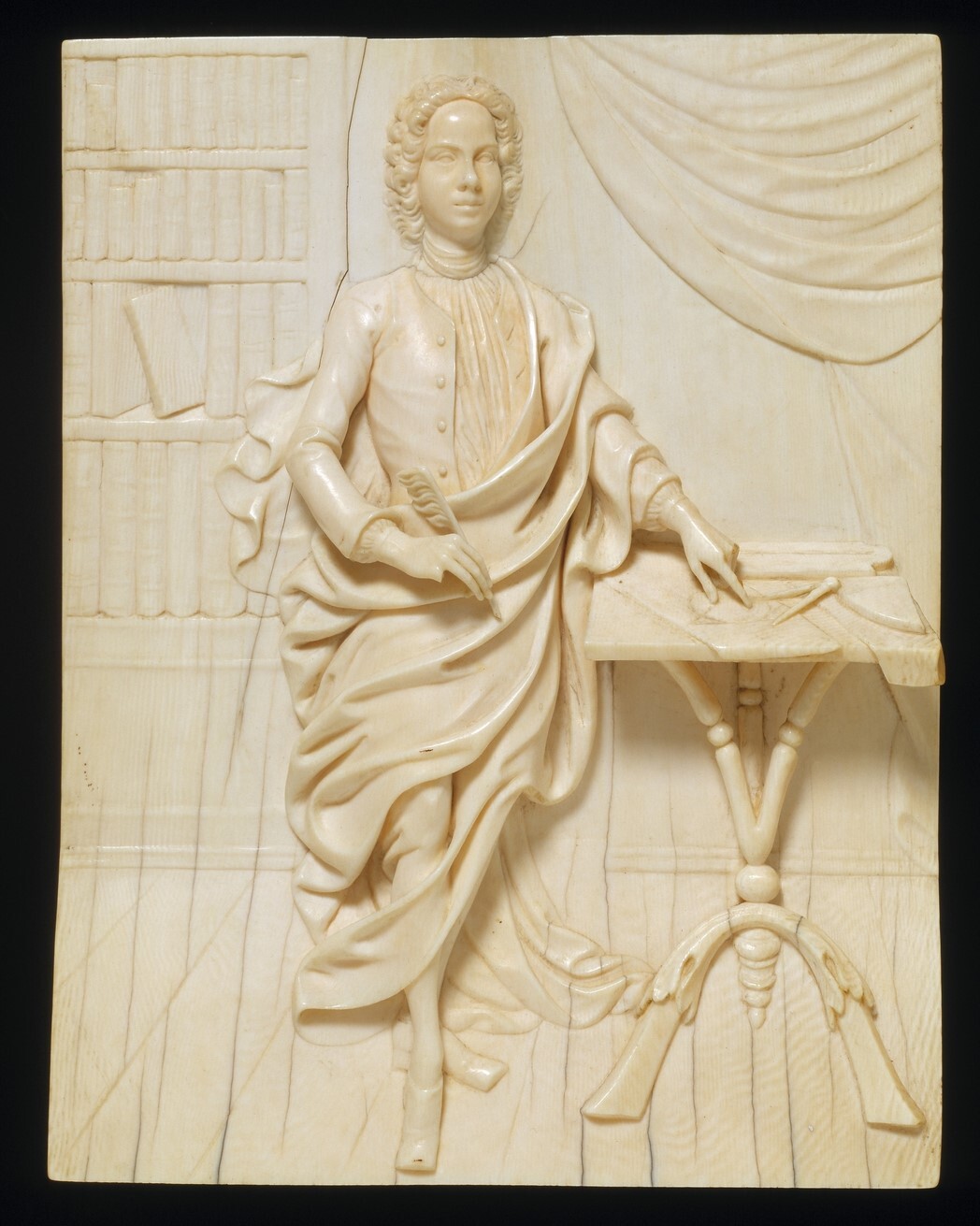 In addition to Huguenot patrons, Le Marchand also received commissions from other artists and intellectuals, as well as a wide range of craftsmen and businessmen (e.g. the merchant Francis Sambrooke). One of David’s main patrons and protectors was the Raper family, silk merchants in the City of London. Two of the brothers, Matthew II (1675-1748) and Moses (1679-1748) successively became Directors of the Bank of England. The carved plaque in the V&A collections depicts Matthew Raper III at the age of 15, standing in front of a library and demonstrating a proposition in geometry. He is represented wearing a wig, cloak, and an unbuttoned jacket which shows a frilled shirt. The relief may have been commissioned by his uncle Moses and was made for an intimate display, probably in a glass case. The Rapers not only commissioned portraits of family members, but also of intellectuals, such as the medallion of the architect Sir Christopher Wren or the bust of Sir Isaac Newton, with which David Le Marchand is represented in his painted portrait.

Despite his fame, David died in poverty and no legal will has been found in the archives. In 1726, the Journal des Commissaires of the French Hospital ‘La Providence’ recorded that David Le Marchand entered the hospital on 3rd February, at the expense of the charity, and died only a few weeks later, on 17th March. The Reverend William Stukeley, whom David Le Marchand had portrayed 4 years before, noted in June of the same year the death ‘of the famous cutter in ivory Monsr. Marchand who cut my profile’.

The ivory carvings illustrated in this blog are held at the Victoria and Albert Museum, London. Most of them are on display in Gallery 111 and in the British Galleries, Room 52. For David Le Marchand’s carvings in the V&A collection, click here.