Read our Blog
Follow us on Twitter
Menu
You are here: Blog » The Grand Tour and its Huguenot Tutors

The Grand Tour and its Huguenot Tutors

The early modern period, which lasted roughly from the Reformation to the French Revolution, saw changes in society in various domains: politics, religion, personal life and also education. Humanists and Reformers each in their turn advocated the importance of education, thus expanding literacy far beyond anything that was known before. Educators were looking for new forms of teaching, and it was some time in the early sixteenth century that educational travel became an important part of education for the elites, with the French philosopher Michel de Montaigne (1533-1592) and the Flemish humanist Justus Lipsius (1547-1606) both writing on the topic. This educational travel, or to use the term that was given to it later, the “Grand Tour”, was aimed mostly at young men, who would complete their general education in this way.

The goals and organisation of a Grand Tour

Michèle Cohen calls the Grand Tour a rite of passage into manhood. Yet, there were young men aged thirteen or fifteen who travelled, for whom this would hardly be the case, but we also see those aged eighteen and in their early twenties, who indeed were finishing their educational curriculum with this journey. Therefore, we can take the Grand Tour to be a stepping stone in the process of maturing.

The Grand Tour always had an educational purpose – to teach the travelling youngster the languages, traditions, customs and geography of the countries visited, and other similar subjects based on experience. At the same time, because it was only the elite who could afford such an expensive enterprise, the second goal was to expand and renew family connections – be it political or commercial.

When thinking about the scope of travel, it of course depended on the country of origin, but countries such as Italy and France were the most common to visit for their historical and cultural value – the classical age for the first, and the contemporary fame of its Royal court for the second. Additional countries would be added according to the family needs and religious convictions – it could be the Dutch Republic, Switzerland, some of the German States, Bohemia, or others.

The young man (or woman) would not be travelling alone. Often it was the tutor who had already spent time educating the boy that was attached to the youngster in his (or her) travels. It could also be a specially appointed travelling tutor who was to supervise the journey. In both cases the goal would be to keep an eye on the young man to keep him away from debauchery, gambling and other inappropriate activities that were common at the time, and that are often referred to in the Grand Tour correspondence.

As part of the educational perspective, the travellers – both the tutor and the pupil – would send letters home to the parents, to report on the activities undertaken. They tell about the various curiosities seen, meetings with prominent courtiers or rulers, visits to the opera, carnivals, and religious activities. This correspondence is essential in uncovering the daily routine of the Grand Tour, the personal relations between children, their parents and the tutors.

But what about the Huguenots? We know that Huguenots played an important role in the upbringing of aristocratic children. Having a French tutor, who had to also adhere to the parents’ religion, would be an asset, as he could teach the French language to the child, and French at the time was becoming the new lingua franca, the European international language. Depending on the status of the family, such a tutor could be a university student or a graduate, and at times even a professor. If we look at the Netherlands, we see a number of them being employed by the Orange-Nassau dynasty – the theologian André Rivet (1572-1651) was the head tutor of prince William II (1626-1650), the scholar Samuel Chappuzeau (1625-1701) taught his son William III (who after the Glorious Revolution became the King of England), the pastor Jean Lemonon (1653-1716) was teaching the future Frisian Stadtholder Johan Willem Friso, and Alexandre de Rasigade (dates unknown) was the travelling tutor to the Englishman Philip Perceval (1656-1680), to list but a few.

Huguenots were known not only for tutoring children at home, but also as travelling tutors accompanying the Grand Tour. One of the perhaps most famous Huguenots turned-travelling -tutor was the historian-to-be Paul Rapin-Thoyras (1661-1725), who initially was head tutor to Henry Bentinck (1682-1726), Viscount Woodstock, the son of the powerful Anglo-Dutch nobleman, Hans Willem Bentinck (1649-1709), the earl of Portland. Rapin-Thoyras took his task very seriously, and drafted an elaborate Grand Tour plan, which included countries as far away as Sweden, but the reality of the onset of the War of the Spanish Succession forced these plans to be narrowed down to some parts of Germany and Italy. The aforementioned Jean Lemonon started his educational career as a travelling tutor to a German nobleman, Creilsheim, before teaching French to another nobleman and eventually getting a professorship at the University of Franeker in Friesland, in the Dutch Republic.

Special manuals were written to help with the organization and execution of a Grand Tour. Huguenots were also part of this educational trend. Jean or John Gailhard (ca. 1659–1708) was a French Huguenot, who arrived in London around 1666, and was employed as a tutor for several English families, and served as a travelling tutor to the aforementioned Philip Perceval between 1676 and 1677. In 1678, he published The Compleat Gentleman, which was a book written in the tradition of Henry Peacham’s The Compleat Gentleman (1622) (both works bore the same title). While the general educational ideas in the book follow the humanistic curriculum, he also makes an outline of what he considered to be the exemplary Grand Tour – a continuation of the basic education, and in addition physical exercise, language training etc. 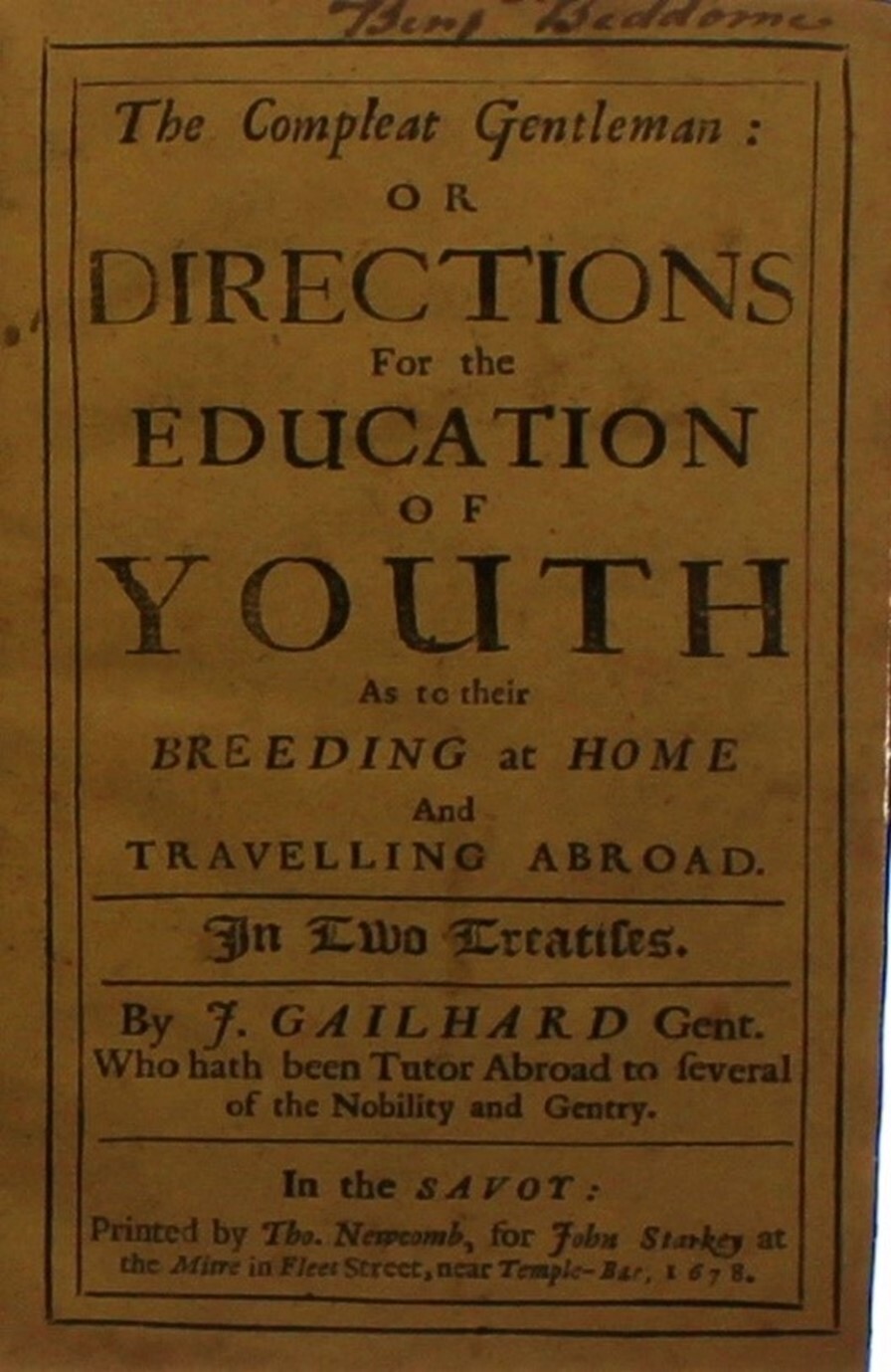 John Gailhard, The Compleat Gentleman: or Directions For the Education of Youth as to Their Breeding at Home and Travelling Abroad, 2 vols., Savoy [London], 1678. © Used with the kind permission of the Angus Library and Archive at Regent’s Park College, Oxford.

Travelling together, often in cramped conditions, with very little privacy if at all, and having non-stop contact with each other put a major strain on the relationship between the tutor and the pupil. On many occasions these tensions resulted in tutors quitting their job in the middle of the journey (such as in the case of Rapin-Thoyras), pupils fleeing from their tutors (such as the case of Philip, the duke of Grafton), or parents being dissatisfied with the tutors, which resulted in their dismissal. Tutors were walking on thin ice, and being left alone without parental authority over their pupil, they often failed.

A telling example of such a situation, was when Rapin-Thoyras resisted in his letter the attempts of Woodstock’s father, Portland, to make him stay longer with his pupil. He wrote to the earl that Woodstock would only see him as a spy of his actions, a person who could not be trusted. And indeed, as the Grand Tour correspondence shows, it was the case – Rapin-Thoyras reported to Portland on Woodstock’s mood and actions.

The Grand Tour as a common educational practice went into oblivion in the nineteenth century, but some of its remnants are still visible nowadays, such as in various exchange programmes for universities and gap year activities. A specifically Huguenot contribution to this domain, is still awaiting evaluation.

G. Gelléri, “Exterminating the Grand Tour: The French Grand Tour was the preserve of the elite, but in the decades before the Revolution ‘the art of being abroad’ endured a crisis. Who should travel and why?”, History Today, 27 February 2020. https://www.historytoday.com/miscellanies/exterminating-grand-tour