Read our Blog
Follow us on Twitter
Menu
You are here: Blog » The Huguenot Society in Denmark

The Huguenot Society in Denmark

The pulpit of the Reformed Church of Fredericia, with the Reformers Calvin on the left, and Zwingli on the right. Photo Tony Wilson

Groups from the Society have visited sites connected with Huguenot refugees in Europe, America and South Africa. In 1999 we went to Denmark where a small number settled.

They found employment as elsewhere in tobacco growing, in military service, in banking, commerce and as silversmiths. In  the town of Fredericia, as guests of the Reformed Church, we had lunch such as the tobacco growers would have eaten. It was created using only potatoes following an ancient recipe. The church was erected in 1735 for the Huguenot community. One or two individual Huguenots, including the painter Jacques d’Agar, were already there in 1719 when Frederick IV formally invited more to come. He sent emissaries to Uckermark in Brandenburg to entice them, offering tax incentives and plots of land. 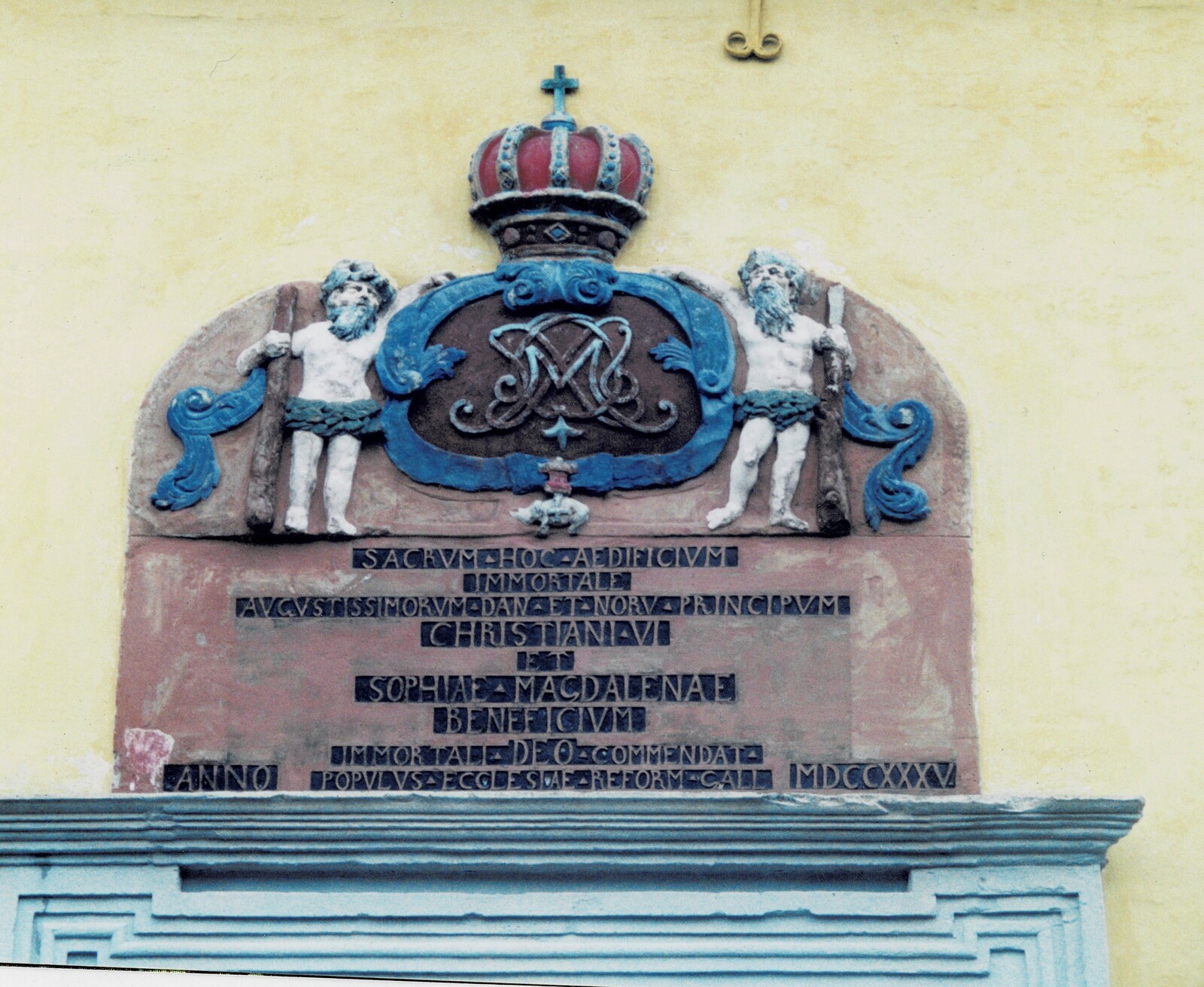 Over the entrance to the church is a coat of arms and an inscription in Latin commemorating the benefaction of Christian VI and his wife Sophie Magdalene, and the date 1735.

In the town is a granite obelisk, 18 metres high, erected in 1952 to commemorate the Huguenot presence. It has fleurs de lys and Huguenot crosses. The long inscription includes: “They experienced persecution and suffering because of their religious convictions and threats of becoming galley slaves or being burnt. In Fredericia the Danish state gave them safe haven. They came as horticulturists and tobacco growers and they were given 220 horticultural plots. They were hard working and thrifty.” Several family names are inscribed. The descendants of two, Armand and Honoré, were present at the potato lunch, as well as the President of the Danish Huguenot Society, Arne Hermann whose surname is a Danish rendering of the ancestral name.

The baroque Reformed Church in Gothersgade, Copenhagen, opposite the royal Rosenborg Castle, has an enclosed royal pew, surmounted by a crown and with the monogram of Queen Charlotte Amalie, wife of Christian V. She was a princess of Hesse-Kassel, a principality that was also a Huguenot refuge. She belonged to the Reformed Church as opposed to the Lutheran persuasion which prevailed in Denmark. As part of her marriage agreement she won the right for herself to continue worship in the Reformed manner.

Charlotte Amalie is credited with persuading her husband Christian V to grant a charter to the Huguenots in 1685. She funded the building of the Copenhagen church, which was started in 1688. Nowadays, Queen Margrethe uses the royal pew when she visits, and the church is home to a German Reformed congregation, a French one and a Korean one.

The church has a very elaborate pulpit raised high above the congregation. Pulpits were and are the focus of Reformed churches. A large model ship hangs in the church.

Members of the  Huguenot community were deeply involved in shipping. One such was Jean Henri Huguetan. He was born into a dynasty of printmakers and book sellers in Lyon in 1664. In July 1685 Protestants were banned from bookselling. He and two brothers decamped to Geneva with their capital and valuables, and thence to Amsterdam. There they became hugely rich with an international book selling operation. Jean Henri became an international financier. After a spell as Minister of State in Saxe-Weimar-Eisenach, he came to Denmark where his talents and international contacts won the favour of Christian VI, who made him Count of Gyldensteen and chamberlain of the court. He was charged with diplomatic missions and with revitalizing the economy, and was instrumental in founding the Danish Company of the East Indies and the Royal Bank of Copenhagen. Huguetan was a great benefactor of his fellow Huguenots, in particular to help them get married. He was married three times, at least once to a rich heiress.

We were guests of the present National Bank of Denmark which in 1999 was still occupying the Peschier Palace named after Pierre Peschier, a member of the Huguenot congregation born in Geneva in 1739. The present building is much altered but retains its superb eighteenth century interior, and one could well imagine it as the home of the very rich trader and banker.

As a young man Peschier was involved in international trading and visited Portugal, the Netherlands and England. He settled in Denmark in 1768 and established a very successful trading empire. Our guide at the bank explained that Peschier prospered mightily from smuggling which evaded the mutual blockades in the Revolutionary and Napoleonic Wars. Ultimately his fortunes fell with the economic decline caused by the endless wars and by the English bombardments of Copenhagen in 1801 and 1807. He went bankrupt in 1811, and died in 1812.

Peschier came to Denmark at the invitation of Frederic de Coninck, a hugely successful entrepreneur. A Huguenot branch of the Flemish family had been established in Rouen, from where the younger members fled the growing persecution in the 1680’s. His ancestor, also Frederic, had fled via the Low Countries to Kent, where he stayed with an uncle, a member of the Crommelin family. His fiancée, Marie Camin, tried to escape from Dieppe with nine other women in the yacht of an English gentleman. The King’s procurator noticed a plank not quite fitting and discovered the hidden women. They were incarcerated in a convent. The prettiest married the Procurator of the Parlement of Rouen and the others were bought out by their relatives. Marie eventually escaped  The couple were married in November 1686 at Hollingbourne, Kent by the Huguenot pastor Jacques Rondeau, and settled in the Netherlands.

Having emigrated to Denmark in 1763, their descendant, the entrepreneur Frederic, became a very rich financier and shipping tycoon. He bought the former royal property of Dronninggard in 1781 and landscaped it in the English style, with which he was familiar through his visits to England. The English style was associated on the Continent with a liberal political stance.

Unlike many English landowners Frederic de Coninck did not have to create a lake, as there was one there already. His Chinese pagoda, the orangery and much else have disappeared, but his mansion, Naesseslot, built in 1782-3, remains. In the park, open to the public, one can see the thatched cottages, one called the Hermitage, and some of the monuments erected by De Coninck.

An obelisk, the Hermit’s Final Farewell, is dedicated to Henri Devron, a fellow Huguenot, who was the designer of the park. He had been Master of the Horse to the Prince of Orange and in 1786 had to leave to resume his military duties. The inscription records his sadness at leaving this tranquil spot for “un retour dans les Fracas du Monde.” At the bottom of the monument are carved a helmet and bugle, and at the top, a hat and a staff.

Another column “to trade and commerce” is “dedicated to my children and successors. In honour of trade and seafaring which under a wise and mild government’s influence gave the power to beautify this place and improve the cultivation of its fields.” There are marble plaques with allegorical representations of Denmark’s sources of wealth: trade, shipping and farming.

Frederic de Coninck named one part of the park Cape Drevon, and another part Cape Elking, after Mary Elking, an English guest. Chevalier’s island was named after Rudolph le Chevalier, an employee. A peninsula in the park is named Lucknam after a country house near Bath occupied by his son in law, where he had stayed.

Elysium ended sadly. De Coninck’s fortune was hit by the wars, in particular by the British bombardments of Copenhagen in 1801 and 1807, the first by Nelson. The  second one was far more devastating and included a temporary occupation by British troops. Not only was the Danish navy destroyed, but de Coninck lost some of his own ships.

De Coninck, with a neighbouring landowner and a pastor, negotiated with the invading British about the supplies they were demanding, doing their best to protect the peasantry. For this they suffered a storm of criticism as collaborators with the enemy - after the enemy had left. A trial absolved all three of the charges, but the stress brought on a stroke. He recovered his mental faculties but remained partly paralysed, and died in 1811.

The family was far from destitute but their glory days were over. In 1822 the eldest son left for Paris to earn a living. An inscription added to the Monument to Friendship in the park records his sadness. The eroded words in French are to the effect that his heart lay in Dronninggard.

The visit was enabled by the unstinting help of the Danish Huguenot Society and it was a pleasure to be accompanied by some of its members on our excursions. The quoted inscriptions are translated from Danish unless otherwise stated.